What do you get when you cover the walls of an upscale clothing store in an iconic Southern California shopping center in rich, vivid greenery? A design experience that customers will remember.

A building’s lobby is said to have the single greatest impact on guests and visitors than any other public area. It will either create a positive or negative visitor experience, depending in large part on its design. This was likely the thinking of award-winning Ambius designer, and Artificial Plants Unlimited client, Roel Ventura when tasked […]

Whether you’re a designer or homeowner, you will love our selection of space dividers and privacy screens made with our realistic-looking faux plants. Browse our selection below to choose the right one for your space and style. 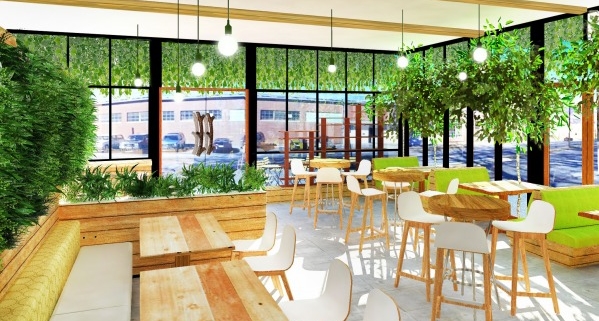 The restaurant business is a competitive one, and with that competition comes the need to provide, not just great food and service, but an engaging ambience for patrons. The design of the restaurant is an integral part of the experience, and many restaurants are using plant life and green elements with their modern décor. But […]

Biophilic design, connecting people with nature, continues to reign as a major trend in hospitality design. Countless studies have shown the positive effects of nature-based design themes on people, including decreased stress and an increased sense of well-being. And these effects aren’t limited to live plants; it’s been proven that simply looking at representations of nature (such as lifelike artificial plants) has similar effects. END_OF_DOCUMENT_TOKEN_TO_BE_REPLACED

Want to make an eye sore your new, posh focal point? That’s exactly what Uptown Buckhead Apartment Homes in Atlanta, Georgia, did with their outdoor living space and pool area. We’ll show you how they did it, how we helped, and how we suggest the same custom-made solutions for your commercial or residential property. END_OF_DOCUMENT_TOKEN_TO_BE_REPLACED

Using greenery to decorate walls is hardly a new concept. In fact, it originated with Babylon’s famous hanging gardens, where it has been posited that the garden walls were climbing with vines and leafy greens. In 1986, French botanist Patrick Blanc took the concept of the “green wall” to new heights and made it a modern design trend with his notable vertical garden design at the Cité des Sciences et de l’Industrie in Paris. And it’s really no wonder that green walls continue as a beloved design trend; they marry the natural beauty of the outdoors with the modern lines and convenience of indoor furnishings. So how can you capitalize on this contemporary design accent, and without breaking your project budget? We’ll show you how in this blog post. END_OF_DOCUMENT_TOKEN_TO_BE_REPLACED

Iconic amusement park Knott’s Berry Farm is considered one of America’s “must see” attractions. Southern California natives and visitors alike return to this historic park every year, which had its humble beginnings in 1920 as a simple roadside stand owned and operated by the Knott family. Eventually the location evolved into the famous Mrs. Knott’s Chicken Dinner Restaurant, which first opened in 1934, before shops, roller coasters, and other attractions were added. END_OF_DOCUMENT_TOKEN_TO_BE_REPLACED

In operation from 1851 to 1990, the Charles Street Jail of Boston, Massachusetts, temporarily housed some of the world’s most famous people, from Malcolm X to suffragette protesters. Reformed in 2007 as the Liberty Hotel, a luxury boutique hotel set in the Beacon Hill neighborhood, the old jail has become a hot spot for locals and tourists alike. What was once the jail’s “drunk tank,” where inebriated disturbers-of-the-peace were placed to dry out, is now a chic eatery called the Alibi Bar & Lounge. Earlier this year, the Alibi’s general manager came to us for ideas on revamping their patio. Here’s what happened next. END_OF_DOCUMENT_TOKEN_TO_BE_REPLACED

By now, you’re likely aware of how perfect our artificial boxwood hedges are as privacy screens and space dividers for homes, offices, restaurants, hotels—and pretty much any space. But you may not be aware of the many other uses for these lush, lifelike hedges. The possibilities are endless, since these hedges are available in both indoor and outdoor-rated constructs, and so easily customized. Here are just a few ways to utilize these thick, green hedges that you may not be aware of. END_OF_DOCUMENT_TOKEN_TO_BE_REPLACED